Viev of the River Thames in the Fog 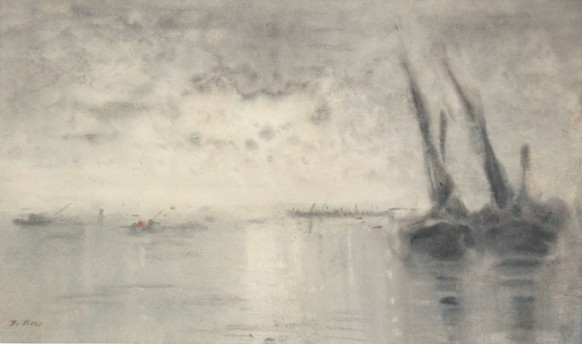 On an expanse of water, which merges with the sky on the horizon, the profiles of some boats can be distinguished: two ferries on the right and smaller fishing boats at the centre and on the opposite side. The air appears dense and loaded with rain, while the fog uniforms the environment giving the landscape everywhere the same chromatic and bright quality. Except for the sky on the right of the boats, where the clouds are becoming thicker and announcing an incoming disturbance.
The view is not clear, yet the nearness between the two ferries' docks points out that we are in a river port. What qualifies the environment is the sky's colour, which recalls the visual impression that the painters of the second half of the Nineteenth Century left of the landscapes offered by the city of London. The English capital, most important financial, commercial and political centre of the world, at the time was living a moment of radical transformation. The opening of the underground in 1863 set a seal on this season, marked by large State interventions towards public health but also by the Institutions' commitment in lavish architecture works where the whole city could recognize itself.
It is therefore obvious that in the second half of the Nineteenth Century London represented a destination where artists, wishing to get to know this ever changing reality, cultural and ideologic before than political avant- garde, were eager to go. The city became the base for many studios of famous masters. These could also turn themselves towards an expanding market, with the growth of urban bourgeois classes that used to prefer modern art to ancient painters, considered as symbols of the old aristocracy. Giuseppe De Nittis, born in Barletta in 1846, arrived in London from Paris for the first time in 18741. At the age of 28 he was already a renowned painter. His wife, Léontine Lucille Gruvelle, model of elegance and representation of the high French society at the time of the Third Republic, hosted one of the most famous intellectual salon of Europe2. Precisely in 1874, De Nittis had been invited, the only non-French painter, to take part at the
first Impressionist exhibition at Nadar's photo studio. At the height of success he decides then to start relations with English collectors, first of all with Kaye Knowles. Already buyer of the painter's Parisian views, the banker commissioned from him several paintings dedicated to London's most representative places3 (awarding the painter with the success at Paris' World Fair in 1878 and the appointment of the Legion of Honour), to which De Nittis added many other works featuring less recognisable yet more "natural" landscapes. We could compare to this kind of compositions the drawing here displayed, notably to the pastels, made without a specific subject, today conserved mainly in Barletta's Picture Gallery (i.e. Tramonto nebbioso or Cantiere)4. Anyway, De Nittis was distancing himself from the impressionist movement exactly due to the fact that he did not share the rational assumption of those masters' scientific vision. He believed that the artist's approach towards nature needed to continue being "emotional", as explained by the romantic tradition; therefore it does not come as a surprise that exactly in this period the painter puts aside Meissonier's attention to the detail, as in the previous paintings, rather starts addressing himself towards the musical atmospheric vision of James Whistler, well known in London and that for twenty years was nurturing his Symphonies with the growing metropolis' scents.
It comes natural to find in Whistler's nocturns the direct precedent of this amazing drawing. As for Whistler, for De Nittis as well London is mainly the city of contrasts and he writes this down in various points of his notebook. "If Dante were able to meet England's slums, he would have placed there the lost souls of the last circle of Hell"5: the clouds dividing the sky on Westminster's profile - in one of the painter's most famous London views6 - while peaceful bourgeois observe from the bridge an incoming storm, are the same that are arriving on this calm stretch of river. The vague portraits of the boats do not corrupt the sense of turmoil that permeates the environment, almost as if the progress is not able to eradicate nor conceal the human soul's restlessness.