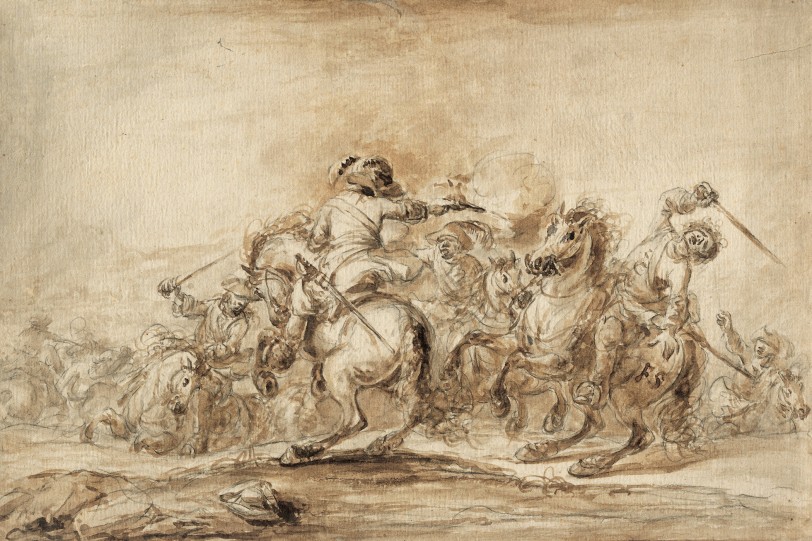 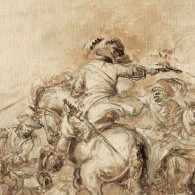 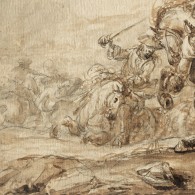 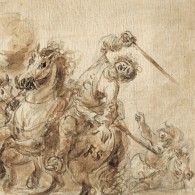 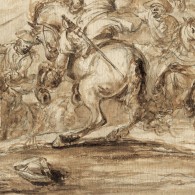 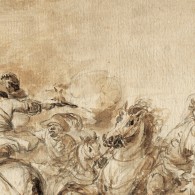 In Francesco Simonini's artistic production drawing has always been an autonomous form of expression even though his work often appears to be a first informal study for an idea to be developed in the future in some painting. In truth his drawings were thought out and created to decorate the walls of a room or to enrich the collection of an aficionado following a constructive scheme in which the scene is surrounded by a frame done in brushed brown ink with the artist's monogram to attest for his work, just as in this "Cavalry Battle" in which we find both the frame and the monogram "F.S." on the right hand part of the horse's shank.
Compared to his contemporaries Simonini, especially in his drawings, shows a freedom of composition that is far from the rigid rules that were gaining favor in the art academies, and is a forerunner of expressive forms that only in the following century would find their true affirmation.
"Suole essere come un fulmine nel maneggiare il pennello" his Bolognese agent said of him on December 14, 1754 and in this lovely drawing Simonini shows his technical ability to construct, based on just a few rapid pencils strokes, the outlines of figures that animate the scene directly with precise and sure brushstrokes that gradually fade to become shading, giving life to an efficient chiaroscuro effect that gives great dynamism to the scene, a sign of great technical skills in using his tools.
Just a couple of years ago I managed to reconstruct a long period of his life thanks to unknown fonts found amongst the papers of Muzio Piccolomini, his client and protector for many years. These papers are in the Archivio di Stato in Siena (La vita di Francesco Antonio Simonini nelle carte di Muzio Piccolomini, in "Paragone", LIX, n. 699, third series, 79, May 2008, pp. 15-58). After an initial period spent in his native Parma, he made a first stop in his long wanderings in Bologna where he met Sebastiano Mazzanti who became his agent and for more than thirty years followed his ups and downs. Later he moved to Venice, where pursued by creditors, he had to flee in September 1748 and find refuge in Florence thanks to the help and protection offered by Muzio Piccolomini, for whom he had already worked in 1726, finding in him a staunch supporter. After Muzio died towards the end of 1761, he returned to his native Parma where he died in 1766 and was buried in the Church of San Giovanni Evangelista.
Many works by Simonini are mentioned in Piccolomini's papers and the identification of some of them has allowed me to define in a more punctual manner the evolution of his pictorial style and the sequence of the transformations that his way of expressing himself underwent in time. In our case, striking similarities both from stylistic and from thematic standpoints can be found with a drawing that has the words: "Bozzetto del quadro fatto fare al Sig.re Francesco Antonio Simonini per la nostra villa di Fagnano il 1752" on it, painting that Sebastiano Mazzanti is surely referring to when he writes a letter to Piccolomini from Bologna on May 13,1752 encouraging him to commission a "Ritratto del S.e G.rale", a large painting lost today of his ancestor Ottavio Piccolomini on horseback "quando era Uffiziale in atto di Comandare", following the indications that we can find in the registers from those years in the inventory of the Villa di Fagnano in 1757.
The vicinity of these two works allows us to date this drawing to this time period and possible to the same year, that is 1752. After he had to flee Venice, Simonini found success and his artistic maturity.