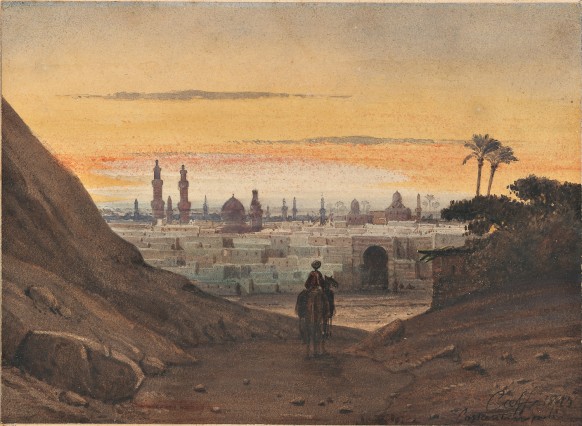 The small gouache reproduced here has a sure place, as far as I'm concerned, amongst the Orientalist works by Ippolito Caffi (16 October 1809 - 20 July 1866.) This painter was born in Belluno but his artistic formation took place in Padua and Venice and especially in Rome where he arrived in 1732 when he left Venice to get away from the stifling academic environment that was popular in that city. A restless and curious man and a patriot, Ippolito Caffi transformed his inheritance of eighteenth century "vedutismo" into a new vein, one made of light, careful analysis of climate, of pre-romantic yet lucid and timely vision. A great traveler pushed along by an ardent desire to see and learn, he reached and documented cities and territories while turning his attention not only to the urban and natural realities but also to the people who inhabited them. Proof of this is offered to us by his innumerable drawn "notes" a vast number of which are in the Gabinetto delle Stampe e Disegni of the Museo Correr in Venice, where you can find the physiognomies, costumes, gestures and movements that reappear later, often on a reduced scale, in his paintings. Rome, Venice, Belluno, Naples, Genoa, Turin, Florence, of all these cities, where he stayed at some point in his turbulent life, Ippolito left a precise and affectionate documentation, of undoubted pictorial quality. Just as he practically photographs cities outside of Italy: London, Paris, Granada and Seville. But the universe that most strongly attracted him was certainly that of the Middle East, where he traveled between September 1843 and February 1844. There he visited Athens, Palestine, Egypt and Turkey. The magic of these locales seduced him. And that seduction is palpable in the emotion that he expresses when he captures these places in his art, in the subtle variations of atmosphere, in the pulsing light that he manages to capture with his brush.
All you have to do is observe the blinding and clear light in his cityscapes of Athens, his paintings of the Aya Sophia, today in the collection of the Galleria d'Arte Moderna di Ca' Pesaro in Venice, but also and especially the View of the Armenian Camp and the View of the Waters of Europe both in the Ca' Pesaro Museum in Venice, the latter done from the left bank of the Bosporus where you can see the profile of the city in the distance, punctuated by minarets and enveloped in a golden cloud. "Pittore di calda ed inesauribile fantasia, Caffi sentiva l'Oriente, e dell'Oriente fu un interprete vibrante di poesia" (G. Avon Caffi, Ippolito Caffi, Padua 1967, p. 71). During his wanderings in the Orient that he so loved, Ippolito filled tens and tens of fogli with notes, drawings, sketches, visages and figures of men and women, city skylines, monuments and sandy hills in a tangle of possible journeys and recalled emotions.
With Napoleon and Colonialism, followed closely by new archeological excavations, travel in the Orient quickly became necessary amongst fashionable European artists and intellectuals. Ippolito was one of the first Italian artists, except for Aglio e and Angelelli who both mostly did artistic documentation for official expeditions, to undertake this Levantine pilgrimage. In the last letter that he wrote to his friend Tessari on the 18th of August1843 from Naples just before he departed, the artist described his expectations from this voyage and also his understanding of the difficulties, not only physical, that he would be encountering, but also the strain of daily life outside "alla sfera comune e venir in tal modo originale". And a few months later on the 3rd of November, while describing his enthusiasm for his travels he wrote: "l'imponenza di Sirme e la sua posizione mi ha sorpreso non poco, ma quando fui giunto dirimpetto a Costantinopoli, a Pera, Galata e il Bosforo, io mi credea trasportato in Paradiso".
There are many fewer sketches from the Egyptian leg of the trip that Caffi took through the Mediterranean Middle East than there are of other places he visited on this trip: his attention seems to be concentrated on the people, on their costumes and gestures. His "memorie" are fewer here and are mostly painted (F. Scotton, Ippolito Caffi. Viaggio in Oriente 1843-44, Venice 1988, p. 14-15). Witness to Caffi's first impressions of Egypt is probably Carovana nel deserto che d'Alessandria mette al Cairo: from a letter that he mailed to Tessari from Constantinople on the 3rd of November 1843, we can date his arrival in Egypt to early December of that year. Cairo: Isola sul Nilo, an image of the Isle of Rodah, south of the city, is also dated 1843 and can be considered to have been done just a bit later. This is, in a certain sense, an emotional point of view re-proposed in our gouache where delicate grey-green tones let a mysterious and subtle fascination emerge. As rightly observed by Piero Boccardo, in contradiction to the writing that is in the lower right, this small gouache shows a new view of Cairo, and more correctly it shows a view of the Cemetery seen from the Gabal al-Muqattam hill, the hill from which the camel and a lone figure are walking down. In the background on the left you can see the two minarets of the El-Azhar mosque; the cupola that is beside them could be that of the mosque that was demolished in 1870 and substituted by the Al-Hussain mosque. On the far right, close to the palms, you'll see the Mausoleum of the Sultan Barquq, with the Tomb of Qa'it Bay on the left. Many thanks to the architect Michelangelo Lupo for his help in identifying the buildings.