Watercolour and white china on paper 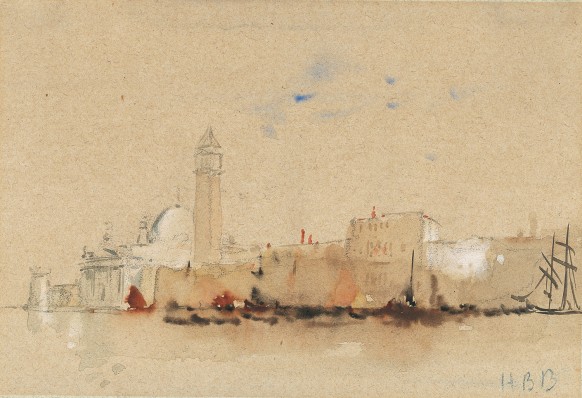 Hercule Brabazon, born in France to a well-off English family, began studying drawing at his mother’s encouragement. Ever since he was young he had the opportunity to observe the lovely Sussex landscapes, which, there can be no doubt about it, helped him greatly in forming his artistic sensibilities.
He enrolled in Harrow School, where he stood out for his talent in piano playing and in painting. Unfortunately, even though these were the rigorous years of the 19th century in England, Brabazon was frequently teased and tormented by his companions whi made him the butt of their jokes. This is why his father sent him off to Switzerland were he became the favorite pupil of Alexandre-Louis Albert-Durande, a scholar of 19th century English painting whose specialisation was watercolorists. After that he enrolled at Cambridge where he took classes in Mathematics and had George Peacock, one of the founders of the Fitzwilliam Museum of Cambridge, as tutor. Against his father’s will Brabazon decided not to continue his studies in Law as was the family tradition, but rather to leave England and go to Rome. This decision caused him much financial distress as his family, to punish him, reduced his allowance. In Rome he was happy and he enrolled in the Accademia di San Luca to study painting and the in Accademia di Santa Cecilia to study music. In Rome he could express his natural artistic tendencies freely and naturally.
He also lived in Spain where he fell in love with Velasquez’s paintings.
Brabazon was particularly talented in interpreting open spaces- maybe in creating perspective he was aided by his studies in mathematics- and he was also an expert in using watercolor becoming a virtuoso in the use of Chinese White, an opache white pigment that, when well mixed with other colors, is one of the bases for tempera. Brabazon invented his own technique, which has never been matched by others: he would dip his brush in the tempera first then touch just the tip with Chinese white then procede to paint on prepared paper without ever mixing the two pigments. Brabazon neither sold nor showed his work until 1892. He was shy, elusive and at the same time terrified that his work would not be appreciated by the refined and snobbish English public. Only in 1892, when he was 71 years old, and encouraged by John Singer Sargent, did he decide to show his work at the Goupil Gallery in Bond Street. Brabazon didn’t attend the opening, he actually fled to Switzerland and from there sent a telegram asking that the show be cancelled. His friends didn’t listen and inaugurated the show that met with extraordinary success.
The View of San Giorgio could be considered the artistic summa of a maestro who spent his entire life painting just because he loved to use watercolors, not because he was interested in monetary gain. He continued to paint for painting’s sake even though his family never gave him a large allowance and certainly not to satisfy his ego. Just a few expert touches of watercolor and Chinese white on prepared paper and you have the explanation for a write-up on his work published in The Spectator (1892): “…the best watercolour painter we have had since Turner…"