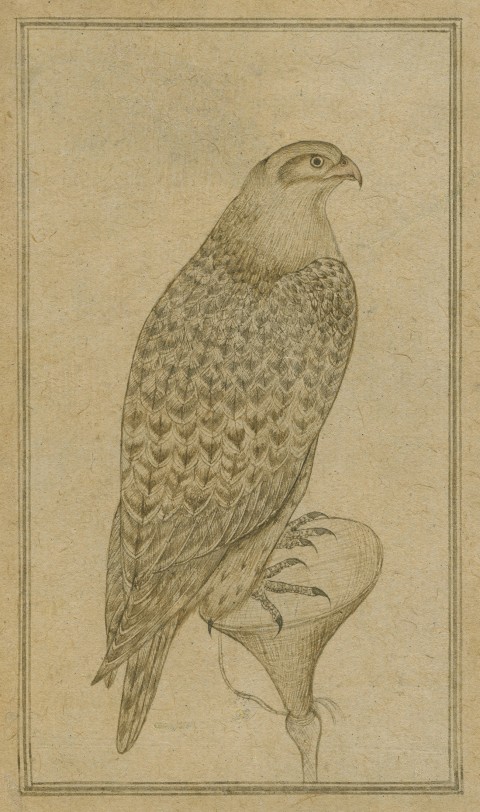 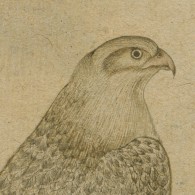 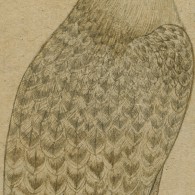 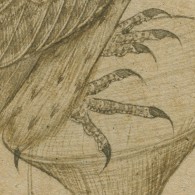 A light-plumaged gyrfalcon is depicted on a falcon reblock, the stand commonly used during hunt. Its attentive and perceptive gaze fully represents the nature of such a majestic and regal bird.

In Medieval falconry, as in the first centuries of Modern Age, gyrfalcons were a prerogative of high nobility and sovereigns, and were sometimes given to kings as precious gifts. The position of ‘Master Falconer’, responsible for caring for the royal falcons and for organising the hunt, soon became one of the courts’ most coveted titles. Charles VI established in 1406 the title of ‘Grand Falconer of France’, one of the Grand offices of the Crown, a full-fledged governmental position. Hence, given the importance of hunt in royal ceremonial, gyrfalcons were unsurprisingly represented in illuminated manuscripts with the portraits of the sovereigns; the Emperor Frederick II of Sweden, the author of De arte venandi com avibus, one of the most famous treatises on Medieval falconry, was regularly depicted with his loyal falcon. His falconer was Guicennas, the German knight author of the treatise De arte bersandi, partly drawn from the text of Moamin, the Arabic falconer, which Frederick II had translated into Latin in Palermo.

Our drawing was made later, around the mid-XV century. It can easily be set in the Lombard area: the legacy of the miniatures of the Offiziolo di Gian Galeazzo Visconti and Giovannino de’ Grassi’s drawings of the Taccuino are both visible in the meticulous pen lines and the delicate chiaroscuro that defines the feathers. Giovannino’s models, inspired by the various miniatures of Michelino di Besozzo and the brilliant artist known today as the “Master of the book of the Mitchell models”, stimulated a vast production of illustrations of the natural world that remained popular throughout the Po valley until the end of the century. Many anonymous yet remarkable drawings attest to this cultural context and are part of the most important museum collections (from the Morgan Library in New York to the British Museum in London); they witnessed to a figurative culture that unprecedentedly analysed the minute aspects of nature and animals, and combined the extreme precision in the representation of figures and an amazed gaze, intimately privy to the mystery of life.