pen and wash on traces of black chalk 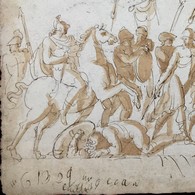 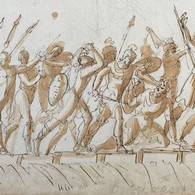 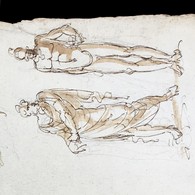 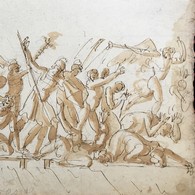 This beautiful sheet, in perfect state of conservation, presents a series of different studies. The main scene represents a battle of the ancient times with the Roman army, led by a winged genius of victory, exterminating the enemies. On the same side we see some studies for standing figures: there is a nude warrior with a sword wearing a helmet; the profile of an old man, probably a prophet, wearing a wide cloak; higher, the figure of a woman walking towards left and covering her head with a hand. On the opposite side there are quick pencil sketches: a sitting woman with a letter on her lap, her gaze lost in space; another woman playing the lute and lastly just an idea of an unrecognisable silhouette.

Our drawing represents a collection of models, of course gathered from different sources: the battle is most likely inspired by the relief of the front of a Roman sarcophagus, while the figures in pen and aquarelle lead back to Michelangelo’s and Bernini’s precedents – as for the latter, note especially the pose of the Prophet, close to the David of Galleria Borghese and the Neptune of Villa Peretti Moltano (today in London, Victoria and Albert Museum) [i]. Lastly, the women’s profiles drawn in pencil lead back to the first half of the 17th century painting and to the legacy of Caravaggio’s style. Therefore everything indicates that the sheet has a Roman provenience and can be dated around mid-16th century.

The author can be identified as Roman painter Francesco Allegrini[ii]. Son of Flaminio – a master born in Cantiano, on the border between Marche and Umbria, but mostly active in Rome – at an early age Francesco left his father’s workshop to the quite more famous one of Giuseppe Cesari d’Arpino; besides, thirty years before Flaminio himself had trained with the same master, Rome’s most sought-after artist, in the fresco decorations, from the end of the 16th century until the 1630s. Francesco collaborates as the assistant of Cavaliere d’Arpino for the last completed frescoes of the Sala degli Orazi e Curiazi in Palazzo dei Condervatori, the Kidnapping of the Sabine women and Romulus drawing the furrow[iii]. Yet the young artist’s attention is rather captured by works previously made in the same environment, especially the Battle against the Veientes and the Fidenates and the Fight of Horazii and Curiatii, made by Cesari at the beginning of the 17th century, and they drew his attitude towards the new genre of battle painting. As well identified by Federico Zeri, the huge fresco featuring the Battle of the Romans against the Veientes of Cavalier d’Arpino stands out as a real archetype of the genre and his meaningful position, in the palace on Piazza del Campidoglio next to the ancient location of the Senate, is basically the reason for the Roman training of most of the first “battle painters”[iv] – and in this group the name of Allegrini Junior stands out. Our drawing, which can be traced back to the author’s early phase and similar to the Battles still featuring Cavalier d’Arpino’s style frescoed by Allegrini in Palazzo Altieri in Rome[v], clearly recalls the master’s ancient model not only in the profile of the horse on the left but also in the bodies of the enemies dying on the ground. Allegrini uses a vigorous hatch, but prefers the autonomy of the line to the volumes, thus showing his manneristic apprenticeship[vi]. Also as far as the pen figure of the nude warrior is concerned, our thought goes to the models of the late Renaissance, from Michelangelo to Giambologna, who were at the centre of Cesari’s style. As for the other figures, as said the painter seems to have freed himself from the style of the ancient master to get close to more recent models, from Bernini to Caravaggio’s pupils; this shows the artist’s eclectic ways of depicting figures.

It doesn’t come as a surprise that shortly after Allegrini enters the group of masters led by Pietro da Cortona: in the battle scenes frescoed a few years later in the Galleria di Palazzo Pamphilj[vii] the classical order and the sense of the narration of this war scene as a triumphant march has no more raison d'être. The battle is no longer as it was during the Renaissance, and as it still is in this beautiful drawing, a sequence of an evolving story, but rather an excuse to express as strongly as possible the rhetoric of the feeling of the Baroque.