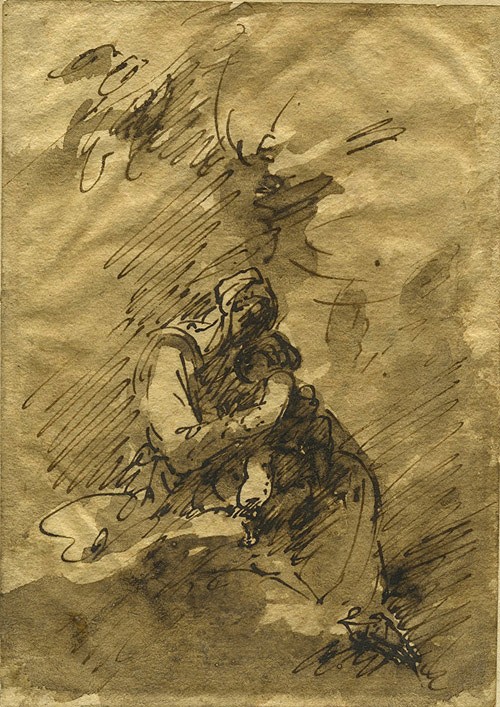 The Virgin Mary, sitting on a rise on the ground, is holding with a loving gesture the sleeping Child. The undefined feature of the surroundings transposes the scene from reality to a lyrical horizon.
The drawing can be traced back to Friuli painter Giuseppe Bernardino Bison, the last protagonist of Veneto's Eighteenth century and one of Italy's most sought-after masters during the Napoleonic period and for all the first half of the new century. Active mainly as scene designer and decorator, the painter stands out throughout his career also for his easel paintings, both of landscapes and views, and religious subjects. There also is a greatly valuable graphic production, quick in the pencil or pen lines, but also meditated in the delicate usage of aquarelle. In this beautiful drawing Bison gets in touch with Giambattista Tiepolo's models, his favoured source for devotion paintings. Aware of being at the end of an era, Bison looks back on the splendours of Venetian tradition at the end of the century (Bison arrived in Venice when he was 14 years old, in 1776, and he trained as figurative painter with Costantino Cedini and Jacopo Guarana, both followers of Tiepolo). The emotional vibration deriving from the sometimes strong sometimes soft usage of the line and from the play of the shadows on the foreground closely echoes the best results of the sketches made on paper by Tiepolo and his sons. The drawing might be a first idea for the Holy family today in Ca' Rezzonico in Venice, in the Egidio Martini collection (inv.232).

The drawing is in perfect condition