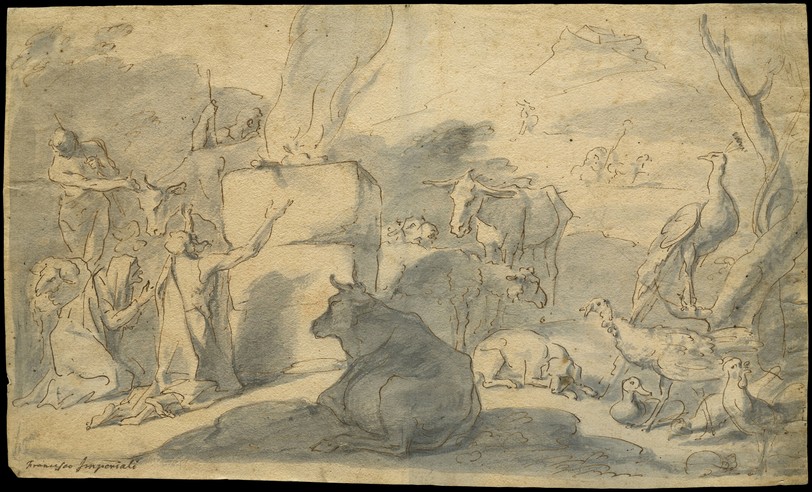 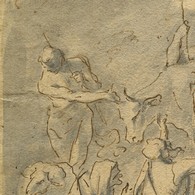 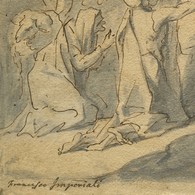 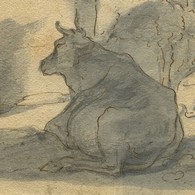 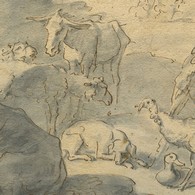 In a desert landscape, without vegetation, Noah is thanking the Ethernal for ending the Deluge with the celebration on a sacrifice. His wife and, behind, his sons are with him, represented as herdsmen. On the right, the animal species that avoided the Deluge since they were safe on the ark are looking at the burnt offering. The drawing is signed in its lower left part by Francesco Ferdinandi also known as Imperiale, Milanese painter active mainly in Rome. Apprentice at an early age of Carlo Vimercati, he acquired his nickname from cardinal Giuseppe Renato Imperiali, under whose protection he started working in Rome in 1705. From this moment, Imperiali progressively distanced himself from his Lumbard beginnings, becoming a greatly valued representative of the Roman post-Maratta manner. The success of the works commissioned by his first patronizer, as two famous altarpieces in the Roman churches of Sant'Eustachio and San Gregorio al Celio, guaranteed him the favour of the clients, especially from outside Italy, as the various paintings sent in Munich to prince Clemens August of Bavaria and in England to several representative of Britain aristocracy show. In his graphic production, more than by Maratta, Imperiali is inspired by Marco Benefial, from which he gets the synthetic usage of the line and the adoption of more strong shadows. The precise description, in this beautiful drawing, of the animal species shows the artist's interest for the painting in general (besides, in his catalogue there are frequent small paintings of animals).