Pen an brush and brown ink on paper 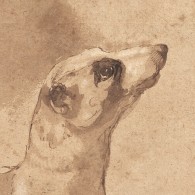 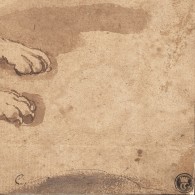 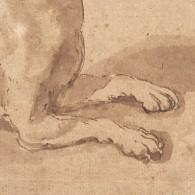 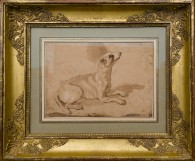 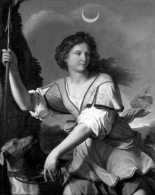 A special thanks to N. Turner for his precious help in studying this drawing

A hunting dog that has been strongly anthropomorphized, has raised its head towards the right, probably answering to his owner. The stamp "CG" with a crown above it, impressed on the sheet on the lower right, has been long identified as the emblem of the Count Giovanni Antonio Gelozzi, a nobleman who lived in Turin between the X VII and the X VIII centuries. In truth, thanks to the discovery of other drawings with this same stamp, but that were done after the death of Gelozzi in 1730, it has been possible to identify the emblem more correctly as that of Modesto Ignazio Bonaventura Luigi Genevosio1 (1719-1795). Genevosio was also from Turin and was related to Gelozzi and documents tell of his passion for collecting drawings by masters of the Lombard, Venetian and Emilian schools. Genevosio has been studied closely in recent years and was one of the most interesting examples of what Francis Haskell called "the years of dispersion" because of his ties to the new market in Europe in the 1700's for drawings and preparatory sketches. Genevosio is known to have been in contact with Mariette and the drawings from his collection are today in some of the most important collections in the world such as those of the British Museum and the Metropolitan Museum. Nicholas Turner recognized this drawing as being the work of Giovanni Francesco Barbieri called il Guercino. The art historian recognized the freeness of the artist's hand and the confidence expressed in the execution of the watercolor landscape as denoting the work of the Emilian painter when he was young. The sensorial quality of the artist's language, especially in the corpus of his drawings, was one of the greatest inheritances that seventeenth century art left to the generations that followed it and it is not a mistake, even in a sheet that should be correctly dated to the first quarter of the 1600's, to recognize auras of the Venetian painters that worked a century later, artist such as Giambattista Piazzetta and Giovanni Battista Tiepolo, even though their later style had stronger chiaroscuro contrasts. The trait that distinguished Guercino drawings, especially those from his early years, is his joy in capturing vibrations of light, his immediacy and his strongly characterized expressions. Here the eyes of the dog, drawn in profile almost as if in an official portrait, have little or no canine qualities and seem instead very human. If this drawing is compared to Turner's The Dog of the Aldobrandi Counts, in the Norton Simon Museum in Pasadena2, the dog in this drawing seems much more sweet and affable, a predecessor for the dog that walks alongside Diana the Huntress in the much later painting (1658-59), That is today in the Fondazione Sorgente collection in Rome3. There are very few sheets in the corpus of Guercino's work where there are portraits of animals. There is a Monkey tied to a chain in the Horne Musuem in Florence4, that is more a caricature than an analytic portrait, and the Cat eating form a bowl in the Teylers Museum in Haarlem, a drawing that was formerly in the Odescalchi collection and that was purchased directly from Guercino by Queen Christina of Sweden5. Assuming that this drawing is the most similar to the one in question even in terms of date of execution, the comparison between the two shows the sentimental overtones of the drawing that we are considering. In the Haarlem sheet the cat is drawn in profile, but its nose is almost completely hidden. Emotion is directed towards the human hand that reaches down to feed the cat, the area where the artist's hand is quickest, as it is also in the hand that caresses the cat's back. In our drawing there is no human gesture that guides the eye of the observer through the drawing. The eye follows the glance of the dog that is answering to a call from its owner. The emotional impulse comes from the outline of the profile of the dog and from the watercolor highlights. The light touches of pencil unite to give a musical feeling that make this sheet a masterpiece, a testament to the inspiration of one of the greatest Old Masters in history of Italian art. 1 See the digital edition (2010) of F. Lugt, Les marques de collections de dessins & d'estampes, Amsterdam 1921, n. 545. 2 L. Salerno, I dipinti del Guercino, Rome 1988, p. 186 n. 104 3 Guercino 1658. La Diana Cacciatrice della Fondazione Sorgente Group, ed. by D. Dotti, exhibition catalogue (Cento), Bologna 2011. 4 N. Turner, in Guercino: la scuola, la maniera, i disegni agli Uffizi, 5 exhibition catalogue, Florence 2008, p. 94, n. 50. D. Mahon, Il Guercino: (Giovanni Francesco Barbieri, 1591- 1666), 2, Catalogo critico dei disegni, exhibition catalogue, Bologna 1969, p. 219, n. 246; C. Van Tuyll, in Guercino (1591 -1666): drawings from Dutch collections, exhibition catalogue (Haarlem), Den Haag 1991, pp. 178-179 n. 79.