Battle Between Christians and Muslims 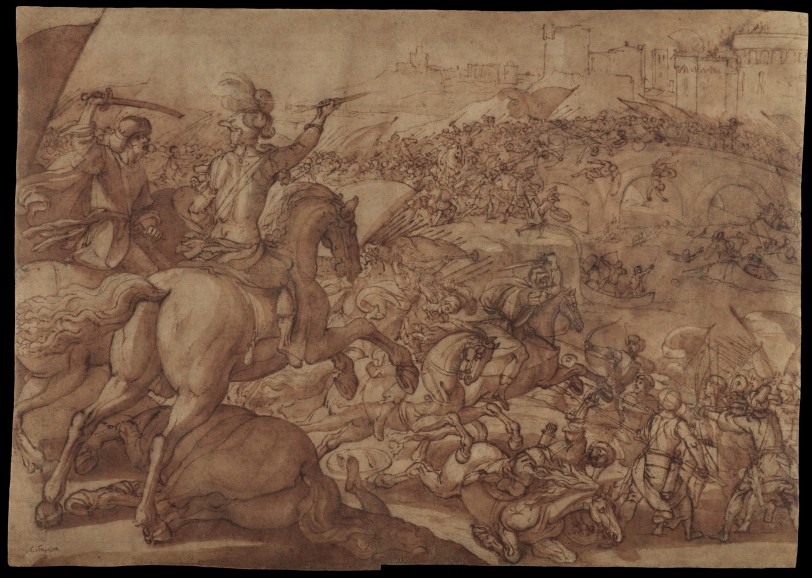 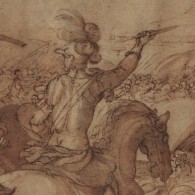 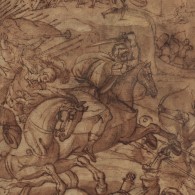 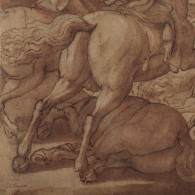 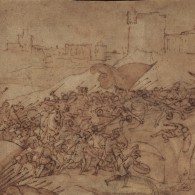 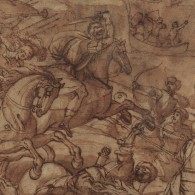 Outside the doors of a fortified city, in a varied landscape in which you can see a coastline, a bridge with three arches and some clay hillsides, a fierce battle between Christians and Muslims is being waged. The former, whose army is advancing from the right, seem to be winning while the Muslims seem to be retreating from the cavalry towards the sea.
This drawing, a highly refined assembly of papiers collés where chiaroscuro done in watercolor follows the varied graduations of color in the support, is signed on the lower left by the Florentine artist Antonio Tempesta, one of the most important specialists in battle scenes between the 1500s and the 1600s.
As the art historian Federico Zeri has shown, the battle scene as a pictorial genre was created in Rome towards the end of the 1500s . It was the Cavalier d'Arpino with his fresco of the Battaglia tra i Romani e i Veienti in Palazzo dei Conservatori done in 1597, who created the genre. Just a few years earlier in the Sala dei Capitani in the same palazzo, Tommaso Laureti had painted the fresco of the Battaglia Presso il Lago Regillo . It was in this context, and always in the city of Rome, that the three series of Battles, the first of which is dated 1601, were etched by Antonio Tempesta. This artist got his formation in Florence under the Flemish painter Jan Van der Straet, who collaborated with Vasari on the decoration of the walls in the Salone dei Cinquecento in Palazzo Vecchio. Having participated, even just as a ragazzo di bottega, or apprentice, in the making of a work as important as the Vittorie contro Pisa e Siena, was fundamental in the formation of the young artist . After Florence he went on to Rome in early 1580 under the guidance of Mattheus Brill, and was already working on the frescoes in the Palazzina Gambara in Villa Lante in Bagnaia, frescos that were completed in 1582 , Tempesta began to experiment with subjects that would become familiar to him beginning with the famous scene of the Caccia al bufalo, which has been rightly compared to a drawing today in Windsor Castle, and which is also very similar to the drawing on show here .
This drawing, however, as we have already mentioned, is later and was probably done in the 1600s. It can best be compared to the Morte di Abimelech from the series of aqua fort etchings done in 1613 and dedicated to Cosimo II Medici , or, with even greater pertinence to the Battaglia tra Cristiani e saraceni in the Collezione Patrizi Montoro. This painting, which was once in the collection of the Cardinal Francesco Peretti, was rediscovered by Anna Maria Pedrocchi and has recently been studied by Francesco Gatta, who has proposed a date, which I believe is entirely possible to apply to the drawing here in question also, of the second half of the first decade of the 1600s . This was the period in which Tempesta, freeing himself from the influence of the artists who worked in a Late Mannerist style in Rome the most important of whom was Federico Zuccari, dedicated himself with a fresh outlook to studies of Classical art and was influenced by the masterpieces painted by the Cavalier d'Arpino, an artist who was still the most sought after in Rome for frescoed decorations. The movement of the masses here is calibrated according to a modern use of light that seems to anticipate the Baroque. Even though they are inserted in a uniform compositional structure, the figures are not made more abstract by the drawing style, by seem to live a life of their own in a drawing that does not seem to be just a preparatory study, but which stands on its own two feet as a complete and finished "opera".