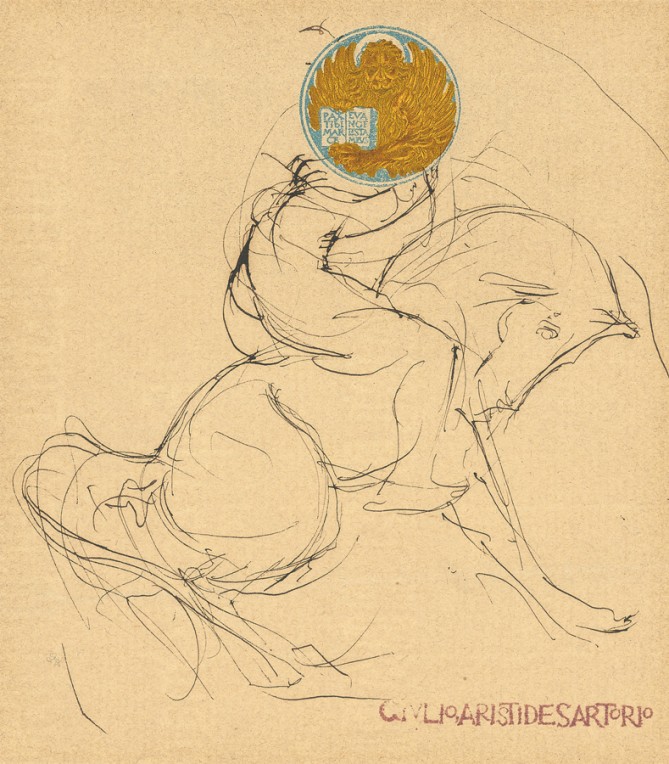 On a foglio decorated with a Venetian crab design known as "moeca" a nude horseman who is trying to stay a stride a bucking horse has been drawn from the profile.
The "moeca" is a symbol of the city of Venice. It gets its name from the Venetian word for soft shell crab, crabs that would be fished when they were molting and their new shells were not yet hard. The wings from the San Marco lion are around it creating a circle like the shape of the crab's shell. As always, in the book that the Lion is holding are written the words that the Angel pronounced to St Mark the Evangelist when he washed up on the shores of Venice. The "moeca" became the symbol used for all cultural initiatives promoted by the Comune di Venezia, initiatives such as the Venice Biennale of art.
Giulio Aristide Sartorio participated in all of the Biennales starting with the first in 1895 up to the eleventh in 1914. At the Biennale in 1899 he had his own show while ten years later at the VIII edition he presented his famous Cariatidi series that was bought by King Vittorio Emanuele III and donated to the city of Venice and today is in the Galleria Internazionale d'Arte Moderna di Ca' Pesaro .
This foglio, a rapid but expertly done pen sketch, was drawn by one of the most famous artists in Italy between the 1800s and the 1900s, an artist whose sensibility was between Art Nouveaux and International Symbolism and whose work gave witness to the importance of Venice's new art show, destined to become the most important in the country. The artist had a long and distinguished career where the quality and variety of his corpus grafico, from the illustrations he did for the magazine "Cronaca bizantina", that published his first work in 1882 and the famous "edictio picta" from the Isaotta Guttadauro by Gabriele D'Annunzio , work that saw him measure his talent with that of great artists such as Giuseppe Cellini, Vincenzo Cabianca and Alfredo Ricci. His casual and rapid hand, his tendency for dynamism both made Sartorio a grandfather of Futurism in painting. In the foglio here on display one can note above all the Neo Byzantine refinement and the rich texture of the whole.