Laocoon Tries to Save his sons from the Sea Serpent 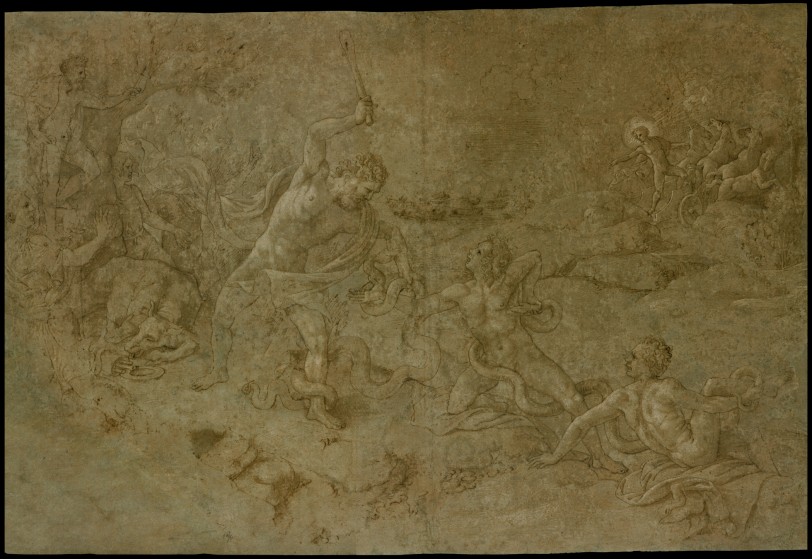 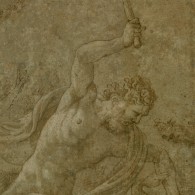 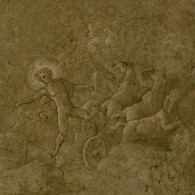 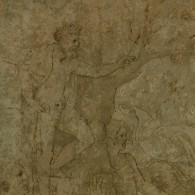 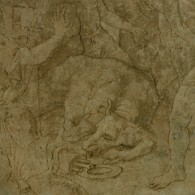 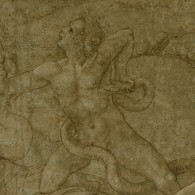 Laocoon, Apollo's priest, fearing that the wooden horse was a stratagem used by the Greeks to enter the walls of Troy, attacked Ulysses, animal beating on its belly with a spear. Poseidon, who was on the Greek's side, sent two sea serpents to attack the seer's sons. In his effort to save them Laocoon too was crushed by the two monsters. This was misinterpreted as a prodigy by the Trojans who then brought the horse into the city. Virgil tells us of the death of Laocoon in the Aeneid (Aeneide, II, 40-56, 195-227.) This drawing represents is the climax: Laocoon, with a club in his hand, is about to strike one of the serpents who is biting his arm and is wrapped around his ankle. His two helpless sons look towards their father. In the upper right Apollo is in a chariot watching the death of his priest, on the other side Poseidon looks towards the sea and watches as his prodigy is carried out. Two figures in the foreground coil back in horror. On the left, in its death throes, is the bull that Laocoon was about to sacrifice so that his people would not fall into the hands of the Greeks and their tricks.
This foglio is a replica with some variations on the fresco done by Giulio Romano one of the long walls of the Trojan Room in the Palazzo Ducale in Mantua. This was one of the rooms of the apartment built for the young Duke Federico II Gonzaga, son of Francesco II and Isabella d'Este. The decoration of these new rooms kept Giulio, the most celebrated artist in the Mantuan court since he arrived in that city in 1524, and his pupils such as Agostino da Como, Rinaldo Mantovano, Luca da Faenza e Anselmo de' Ganis, from 1536 to 1540, the year of the death of the Duke . The Trojan Room, cited by Vasari already in the first edition of his Vite2, is one of the masterpieces of the artist's Mantuan works and is the only room in the apartment to be preserved in all its magnificence. In the piece that depicts The Death of Laocoon the group is without the synthesis that, starting from when the famous Roman sculpture was found in 1506, became almost obligatory in later artistic representations. The articulation of the scene corresponded to descriptive needs that are coherent with other episodes on other walls of the room.
Compared with the fresco, which was probably designed by the head of the school, but actually executed by his pupils, this foglio has a different setting. First of all, the sequence of action is more compact, the detail of wall of Troy is almost absent and Laocoon himself is on a high rock that is not in the fresco. The sea, rather than run across the scene as in the model, is in the centre background. These variations, as with the different drapery effect of the mantels where Laocoon's sons are lying, lead one to believe that this drawing could be a third study for the fresco rather than a drawing done from it. It could be a drawing done by Giulio Romano himself previous to the completion of the fresco, a drawing that later scholarship has lost all trace of. The energy in the figures, whose poses lack the Corregio-esque component that permeates the fresco, reminds one of the dense, Michelangelo-esque interpretation of the text that Giulio painted. The color scheme is also similar to the original so I feel that a date that goes just a bit beyond the second half of the century, when the entire northern area of Italy - from the Ferrara of Bastianino to the Lombardy of Lomazzo - was following the Florentine genius, lead to prove their adhesion to the new- could be correct. This beautiful foglio, which can be considered in a northern Italian context- is therefore an important document of this change and in this light acquires an autonomous value even regarding the original which it could have been done from.